The Fibonacci sequence – 1, 1, 2, 3, 5, 8, .... – often comes up when we look at growth. An example is the family tree of bees. In every bee hive there is one female queen bee who lays all the eggs. If an egg is not fertilised it eventually hatches into a male bee, called a drone. If an egg is fertilised by a male bee, then the egg produces a female worker bee, who doesn't lay any eggs herself. 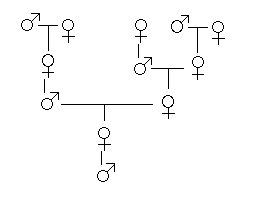