Sometimes two games are the same even if they look completely different. An example involves the game of noughts and crosses and another game called Fifteen.

Most people are familiar with noughts and crosses. It's played on a grid of nine squares. Players take turns in marking squares with their symbol, which is a cross for one player and a 0 for the other. The winner is the first person who manages to mark three squares in a line, either vertically, horizontally or diagonally.

Fifteen involves the numbers 1 up to 9. In this game, players take turns to pick one of the numbers. They can only pick numbers that haven't been picked before. The winner is the first person to pick three numbers that add up to 15.

But what about winning the games? A player wins noughts and crosses if they manage to mark three squares in a line. If the same player is also to win the corresponding game of Fifteen, we can't fill the numbers into the squares in any old way. What can you say about the way the nine numbers need to be arranged in the grid?

They have to be arranged so that the numbers in each row, column and diagonal of the grid add to 15.


Can you figure out where in the grid to write each number from 1 to 9 to make sure the player who wins noughts and crosses also wins Fifteen? 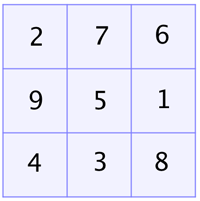 When two games are equivalent in this way, when one game can be translated exactly into the other, we say that they are isomorphic. There are several pairs of games on this site that are isomorphic. Can you find them?

This was something I can learn from. Some parts easy, some parts hard. But wow, so fun!!!!!