Out of all the regular polygons there are only three you can use to tile a wall with: the square, the equilateral triangle, and the regular hexagon. All the others just won't fit together. 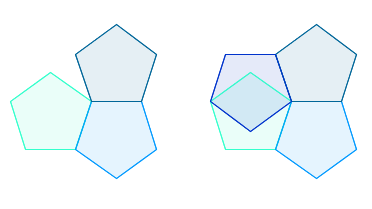 It's quite easy to prove this. A regular polygon with $n$ sides has interior angles of

Suppose you try and make a tiling by fitting several copies, say $k$ of them, around a point so that they all meet at a corner (see the image above). Then the $k$ angles must add up to 360 degrees. If they add up to less there will be a gap, and if they add up to more then copies of the polygon will overlap.

Using a similar argument as above you can convince yourself that this only works when $n=3$ or $n=4.$

You can read more about tilings on Plus.