What can you do with a single fold?

You can make a fold through two points:

You can fold one point onto another:

You can fold one line (that is, the crease made by a previous fold, or the edge of the paper) onto another line:

And you can do things that are a little bit more complicated if you have some points (which might be, say, where two creases or folds meet) and lines (say, previous folds or the creases they left behind).

You could make a fold through a point, so that your fold is perpendicular to a given line:

You can make a fold through a point, so that it places another point onto a line:

If you have two points and two lines, you can make a fold so that it places each point onto a line:

And if you have a point and two lines, you can make a fold that is perpendicular to one of the lines and places the point onto the other line: 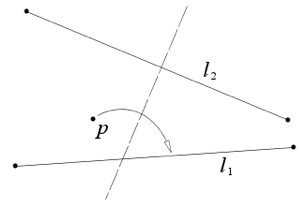 These are called the axioms of origami and they describe all the things you can possibly do with a single fold. These fundamental truths about origami have been discovered by several people since 1989, but named for two Japanese mathematicians Humiaki Huzita and Koshiro Hatori. Breaking origami down into these fundamental axioms allows investigations of what is possible.

These axioms might look quite familiar if you’ve already come across the axioms of geometry.

You can read more about the axioms of origami and what you can do with them in The power of origami.

This is so hard to make but at least I made it, yay!