Not the Whole Truth About Triangles

Try it for yourself – draw any triangle you like on a piece of paper and measure the angles. What did you find?

Or you can try it with our interactive triangle applet - move the point to see what happens to the sum of its three angles (marked in red, green and blue).

The angles of a triangle adding up to 180 degrees feels like a fundamental truth. In fact, it was the fifth axiom of geometry the Greek mathematician Euclid came up with over 2000 years ago. You can think of an axiom as a fundamental truth. Euclid’s axioms were all the things that were possible to draw with a straight edge (a ruler with no marks) and a compass. (You can find out more about Euclid’s axioms here.)

Although we think of axioms as describing fundamental truths, that’s not quite correct. Axioms are really just rules to live by, the constraints we’ve put on our system. Euclid’s axioms covered everything that was possible to construct with a straight edge and compass: they were rules that only worked for flat spaces like a piece of paper.

So if axioms are just rules, what happens if we break them? You might be surprised to realise that you already know of lots of examples of triangles which break Euclid’s rules – triangles whose angles do not add to 180 degrees – and they are literally under your nose. 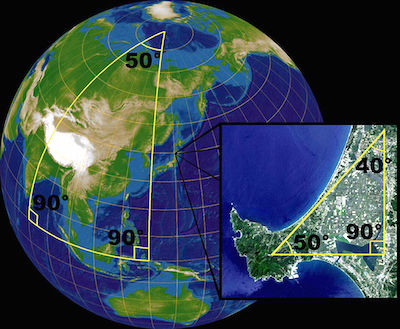 There is proof right under our feet that the angles of triangles don't always add to 180 degrees.
(Image by Lars H. Rohwedder, Sarregouset CC-By-SA)

So what is different? How can this be?

The difference is these triangles are not drawn on a flat piece of paper, they are drawn on the curved surface of the Earth. Although a small patch of the surface of the Earth looks flat, as you look at larger and larger areas of the surface you’ll quickly realise it is quite different. This is why it’s hard to draw accurate maps of the Earth on a flat piece of paper. And why you always end up with folds of extra paper if you’ve ever tried to gift wrap a football.

If you break Euclid’s triangle rule and say the angles of a triangle always add up to more than 180 degrees you get geometry on surfaces that are curved like the Earth or a ball, called spherical geometry.

You could also break Euclid’s rule for triangles in another way and say that the angles of a triangle always add up to less than 180 degrees. With this new rule we get something called hyperbolic geometry. 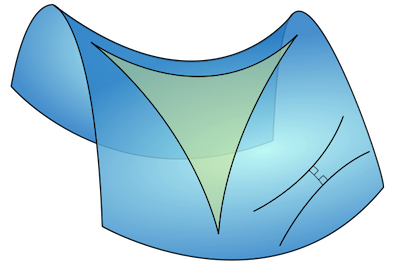 This geometry again happens on curved surfaces but they are curved in a different way. Hyperbolic surfaces have loads of extra material in them, so they have to curl up to fit it all in. A curly kale leaf is an example of a hyperbolic surface.

Mathematicians are really interested in geometry in all of these types of spaces: flat, spherical and hyperbolic. Physicists are too as they think the Universe we live in might not be flat after all. That’s the good thing about maths: lots of exciting things happen when you break the rules!

Hello,
Geogebra file provides a visual representation of a dynamic triangle. However, it is not straightforward for me to visualise why it works for any triangle. While working with the article by Fuys et al about geometrical reasoning, suggests the grid that helps to identify equal angles and thus to prove the sum of interior angles of a triangle. The snap shot is attached below.
https://www.dropbox.com/s/pk3oundp4wf7h4d/Snap%202016-03-15%20at%2015.10...
Kind regards,
Maria (teaches at Cambridge Regional College)
PS the initial picture on the top of the page is brilliant for visualising the problem!

Definitions along with Axioms

This is obviously some great mathematics here and we are going beyond the restraints of Euclidean Geometry. Asking 'what if' questions are great as we explore mathematics.

Interestingly though I thought that a triangle is defined in the Euclidean plane as having straight sides and forming closed plane shape with three angles. Would we consider two lines of longitude meeting at the north pole to form a vertex and both of them meeting a third line, the equator, to form two vertices as being a triangle? In my mind we would have to change the definition of a triangle or just consider these shapes not in the Euclidean plane. So the question is whether these triangles break the axiom for sum of interior angles or are they even triangles?

I think it is interesting how the world is made of the different triangles.I also never heard of hyperbolic surface and now have a better understanding of certain problems because they are triangles with excesses material. A lot of triangles have things attached or seem like a tessellation.